100% guaranteed ticket marketplace. Resellers may list tickets above or below face value.

When it comes to the greatest, quintessential rock songs of all time, you may only need a few lines or a guitar riff to get in the mood.

The heavy baseline of Queen and David Bowie's "Under Pressure" is virtually unmistakable, not unlike the opening cords in The Clash's "Should I Stay or Should I Go" or the impossible-to-imitate vocals in Aerosmith's "Walk This Way."

You've probably already started singing along, and we haven't played a single note from these tracks. Regardless of which music genre you gravitate toward, you can probably spot the classics from a mile away – but what about their logos?

From grunge and rock 'n' roll to hip-hop and boy bands, an artist's logo can be synonymous with their brand (and even their identity, in some cases). You may know the lyrics, but how well can you recall performers' iconic symbols without a visual aid? For a closer look, we asked nearly 100 people to recall from memory musician and band logos, including those of Nirvana, Kiss, the Jonas Brothers, BTS, and more. Keep reading to see the good, the bad, and the downright ugly. 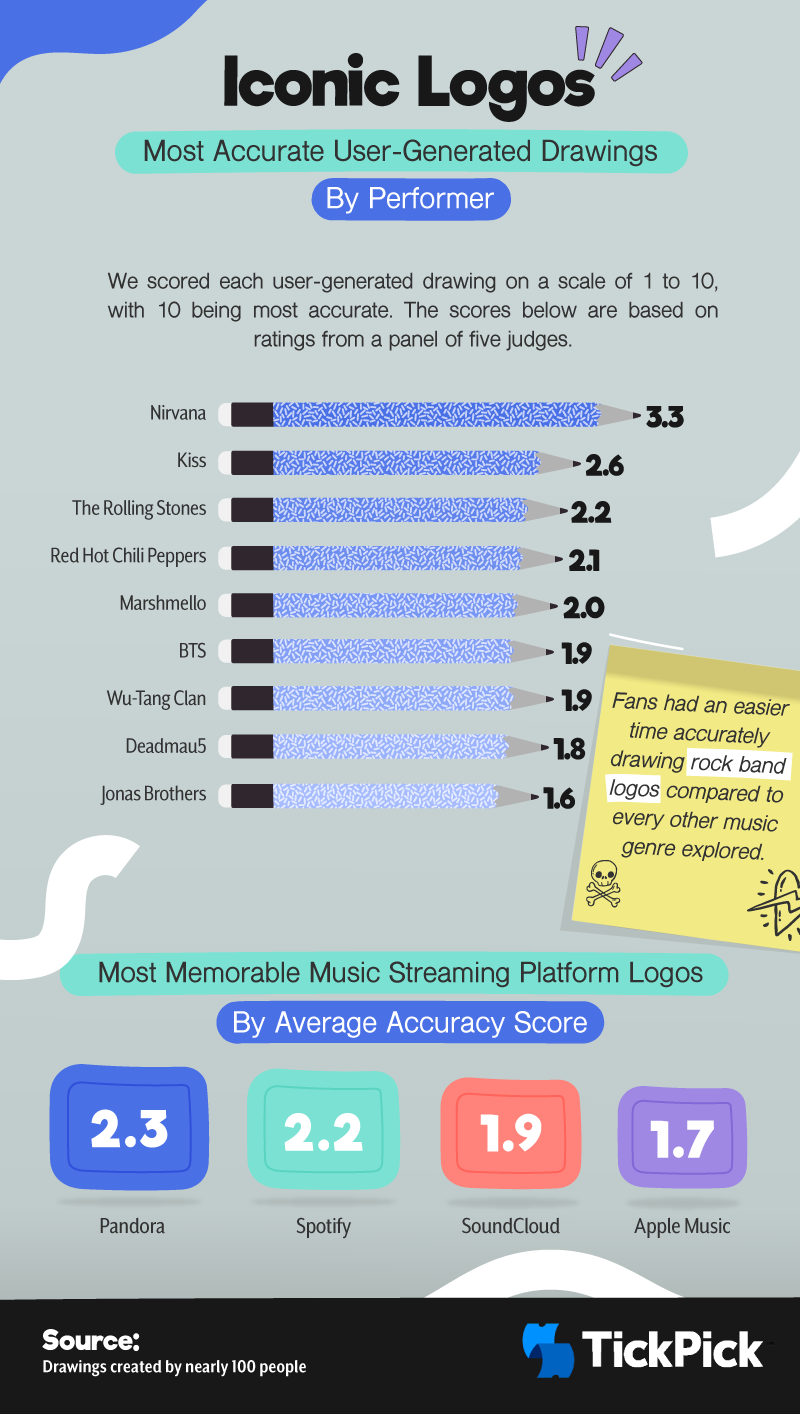 They may not have been around the longest, but critics credit Nirvana and the iconic "Nevermind" album as the start of the rock revolution . Releasing in 1991, "Nevermind" brought the newly minted grunge genre into the limelight, opening the doors for future artists like Green Day and Weezer. Being around longer or having a more recent hit on the Top 100 Billboards may not help make your logo more memorable, either: respondents we polled most accurately drew the Nirvana logo over every other performer on our list .

On a scale of 1 to 10, with 10 being the most accurate, Nirvana came out on top with an average score of 3.3. Following Nirvana, fans and nonfans scored highest overall when asked to draw the logos for Kiss (2.6), The Rolling Stones (2.2), Red Hot Chili Peppers (2.1), and Marshmello (2.0). People struggled the most when asked to recall the logos for the Jonas Brothers (1.6) and Deadmau5 (1.8).

When asked to recreate the logos for popular music streaming platforms, Pandora was the most memorable (2.3), followed by Spotify (2.2) and SoundCloud (1.9). Despite Apple Music having 60 million subscribers, people had the hardest time recreating its logo accurately, scoring a paltry 1.7, on average. 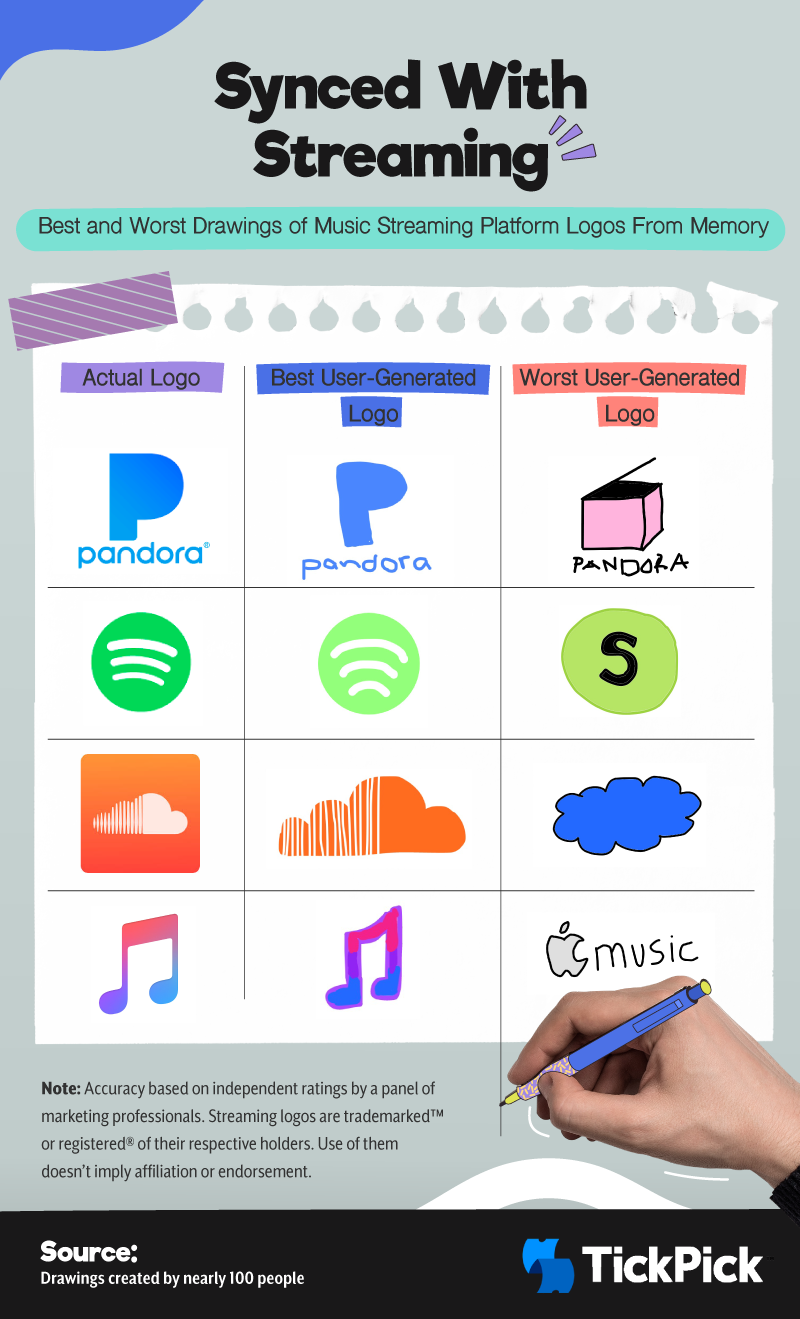 What you listen to might be less important than where you decide to get your music. Apple Music and Spotify might be the leading contenders for streaming supremacy, but they may not be making the best visible impression.

Here, you can see the actual logos for Pandora, Spotify, SoundCloud, and Apple Music, in addition to the best and worst user-generated renderings. While one person took a more literal translation of Pandora by drawing a bright pink box, another user simply drew a blue cloud for SoundCloud, and another attempted to draw the Apple logo next to the word "music."

When we say that some of the music logo drawings we received – from Kiss and Wu-Tang Clan to Nirvana and BTS – were bad, we mean really, really bad in some cases. In this graph, you can see the actual logos for all nine artist groups in question, followed by the absolute best and worst renderings submitted to us.

Commissioned for £50 in 1970 for the band's upcoming European tour, Mick Jagger's inspiration for the famous lips and tongue is said to have come from the Hindu Goddess Kali . The rest, as they say, is history. Bold red lips, an equally colored tongue, and bright white teeth make up The Rolling Stones' logo, and some of our submissions nailed the aesthetic. Even people who couldn't recreate The Rolling Stones logo perfectly still recalled the basic design.

In contrast, the worst reproduction of the Kiss logo confused the makeup worn by band members as the group's logo, and one Jonas Brothers design drew stick figures of the group on stage instead of the monogrammed crest. Some people even took band names literally, with the least accurate Marshmello logo featuring a marshmallow on a stick, and one person looking to convey the Red Hot Chili Peppers drawing a red pepper against a yellow flame.

Where rock legends Kiss, Nirvana, The Rolling Stones, and the Red Hot Chili Peppers were concerned, fans were far more confident than nonfans when recreating each logo.

When asked to rate their confidence in recreating The Rolling Stones logo, fans averaged a 60 out of 100, while those less familiar with the English legends averaged a 43. Despite a relatively large gap in confidence, we found a much smaller difference in accuracy: An average of 2.5 among fans and a score of 2 among nonfans.

Like The Rolling Stones, fans rated their confidence 45 points higher when asked about drawing the Nirvana logo and 33 points more for the Red Hot Chili Peppers. Not only did "Californication" fans score a 2.4, on average, for their logos compared to 1.6 for nonfans, but also 30% of all user-generated drawings included a pepper in the design. Designed by lead singer Anthony Kiedis, the bold, eight-pronged, red asterisk that makes up the Chili Peppers logo is often referred to as the "Star of Affinity."

Despite their lack of confidence, people less than fond of Kiss were nearly as skilled as fans at remembering and reproducing the Kiss logo, scoring 2.6 and 2.7, respectively.

Formed in 1992, the hip-hop group Wu-Tang Clan went through multiple iterations of their logo (some more violent than others) before settling on the stylized "W" they're recognized for now. While Wu-Tang Clan is considered a defining element in the "golden era" of rap, fans rated their confidence a 68 compared to 23 for nonfans.

In addition to nearly 60% of all user-generated drawings forgetting to include Wu-Tang's wordmark, fans scored a 2.3 out of 10 for their renditions, compared to 1.7 among nonfans.

Standing Out in EDM

Marshmello, a DJ and electronic music creator, is well-known for wearing a larger-than-life smiling marshmallow with black Xs for eyes. As one of the highest-paid DJs in the world, it's sometimes easy to see how Marshmello's appearance is sometimes confused for his logo.

The Marshmello logo consists of a smile with extended arms and legs in the shape of a large "M." Fans of the EDM superstar rated their confidence in recreating the logo at 69, followed by 19 for nonfans. However, both fans and nonfans of Marshmello failed to score high marks for their efforts. Marshmello fans managed to score a 2.5 out of 10 for accuracy, followed by 1.8 for nonfans. Similarly, while just 3 percent of Deadmau5 drawings were near-perfect in their rendition, fans scored an average of just 2.2 out of 10 followed by a 1.7 out of 10 among nonfans.

Battle of the Boy Bands

Having been compared to "Beatlemania" in terms of their reach and popularity, Korean boy band BTS might just be taking over the world. Of course, the Jonas Brothers are accustomed to similar levels of success, even if their logo is slightly less recognizable.

While we may have found a few gems in the roughly 1, 300 music logo submissions, the average rendition was barely recognizable. At best, drawings of the Nirvana logo scored a 3.3 out of 10 overall. Even among fans, despite feeling more confident in their artistic renderings, the highest accuracy rating was 3.6 (BTS) overall.

For most fans, music isn't about the graphics or logo design. If you want to see your favorite artists in action, TickPick is a place where smart fans buy, sell, and bid on their favorite performances. With absolutely zero hidden fees, TickPick is the first ticket marketplace where consumers come first. From sporting events to musical performances, search for tickets to your next big event at TickPick.com today!

We conducted a drawing experiment in which 102 Americans were recruited. Participants ranged in age from 18 to 59 with an average age of 33 and a standard deviation of 9. Forty-five percent of participants identified as female and 55% were male.

At the beginning of the experiment, respondents were taught how to use the sketching software to maximize their ability to draw accurately. Directives were given to spend a maximum of 60 seconds drawing each logo. To calculate the average confidence ratings, we asked participants to rate their confidence levels on a scale of 0 to 100, with 100 being extremely confident. Participants were also required to indicate if they were a fan of each band and/or artist and if they used each music streaming service.

A panel of five marketing professionals independently scored each drawing on a scale of 1 to 10, with 10 being an identical iteration. Scores were averaged to determine average accuracy levels. Due to the overwhelming submission of poorly drawn logos, drawings that scored 5 or higher for accuracy were considered "near-perfect drawings."

The main limitation of this experiment was that participants weren't actively monitored during the drawing task. It's entirely possible that participants disregarded the instructions and referenced outside sources to increase each drawing's accuracy. As such, there's no way to confirm that all drawings were a product of memory. Not all drawings are shown.

Ready to make some music? Share the results of this study for any noncommercial use simply by including a link to this page in your story.